Skip to content
Home/News, Opinions/Critical velocity and the significance of the imminent retraction of 2020 NFPA 502’s Annex D critical velocity equations Part One
Previous Next

This note summarises what was discovered in a review of the technical background for the change to the critical velocity values resulting from Annex D of (NFPA 502, 2020), as well as the recent developments regarding the critical velocity in Annex D of (NFPA 502, 2020), and why a retraction of this formula is imminent.  It is very significant for road tunnel design in many parts of the world.

The everyday objective of a tunnel ventilation system is to provide a safe environment for all tunnel users by diluting vehicle exhaust gases and particulates.  In case of a fire, the focus becomes the control of the smoke, to provide tenable escape conditions for the tunnel users and access for attending emergency services.  With vehicles becoming cleaner, the fire case now generally controls design, in terms of the required ventilation power, the costs, and the tunnel safety.  Different countries have some very different approaches and philosophies on the control of smoke in tunnels.  A brief overview will be provided here but a more comprehensive discussion about the different ventilation philosophies during a fire, and the different applied velocity approaches, is given in (Sturm, Beyer, & Rafiei, 2015).

European approaches do not rely upon high tunnel air velocities to prevent any upstream propagation of a hot smoke layer.  Especially for bidirectional traffic and tunnels with high congestion, European standards refer more to a ‘low velocity’ philosophy to preserve any smoke stratification, reduce the potential risk of fire spread and to allow tenable self-rescue conditions as far as possible, including downwind of the fire.

By contrast, another common approach is ‘preventing’ any smoke propagation upstream the fire by applying higher tunnel air velocities.  The approaching air velocity at which an upstream smoke propagation is just prevented is known as “critical velocity”.  The US standard NFPA 502 historically proposes such an approach and provides a formula in its Annex D for calculating critical velocity.  Control of hot smoke by ensuring critical velocity is often specified by clients in Asia, Africa and the Middle East, as well as Australia, via NFPA 502.

Designers would often like to propose alternative solutions to imposed high velocities (like critical velocity) during a tunnel fire.  However, there is no choice when it is made a design requirement via project documents invoking the US standard NFPA 502.  The argument that Annex D is only “informational” and not compulsory is true in a literal sense, but in practical terms quite misleading.  Even if it is noted as being only “informational”, it is imputed as authoritative because it is an output of the expert NFPA 502 committee, which has been voted upon and accepted using the NFPA approvals process.  There is a reasonable presumption that the specific formulae and guidelines are authoritative and can be relied upon and trusted.  Therefore, approving authorities are very reluctant to take issue with such advice in a prominent standard, and so it becomes a de facto requirement..

The 2020 version of NFPA 502 adopted a new formula for critical velocity, which, compared to previous formulae, greatly increased the values for critical velocity.  These higher values substantially increased the required ventilation power in road tunnels (by a factor of around 2.7 relative to 2014 for some cases), and thereby increased capital costs and operational costs of infrastructure built and operated to the 2020 requirements.  More importantly, the resulting higher velocities do not necessarily increase the tunnel safety, as they may in some circumstances degrade any smoke stratification as well as cause a faster fire growth rate and possibly also facilitate fire spread between vehicles.  The unexpectedly high ventilation velocities led (Stacey & Beyer, 2020a) to review the technical background and merit for the change to the critical velocity values resulting from Annex D of (NFPA 502, 2020).

Brief Background of the Critical Velocity in Annex D of NFPA 502.

From the 2014 version, NFPA 502 proposed a new equation for critical velocity in 2017, and a different one again in 2020.  Figure 1 shows a plot of critical velocity against total heat release rate for typical (3-lane) road tunnel dimensions at zero slope, for the latest three versions of Annex D of NFPA 502.  (Kennedy, 1997) looked at the past, present and future of critical velocity and gave the background to the NFPA 502 formula current up to and including the 2014 issue.  This formula is based on a critical Froude number model and was derived from the Memorial Tunnel test results.  The 2014 equation is known to underpredict critical velocity for low heat release rate (<15 MW) and is conservative for fires with high HRRs (100 MW and higher).  That formula was changed in NFPA 502 in 2017 and conservatism was added by introducing different critical Froude numbers for HRR < 100 MW.  The 2020 version of NFPA 502 turned away from the critical Froude number model and adopted a non-dimensional model developed exclusively from small scale tests.  The newly adopted formula was taken from the work of (Li, Lei, & Ingason, 2010) and (Li & Ingason, 2017).  Interestingly, both (Kennedy, 1997) as well as (Li, Lei, & Ingason, 2010) quoted a good agreement with the Memorial Test results (as tabulated by (Kile & Gonzalez, 1997)).  As the critical velocity values resulting from these equations are very different, it is obvious that at least one of the formulae must actually be very different from the critical velocity values obtained during the Memorial Tunnel fire tests. 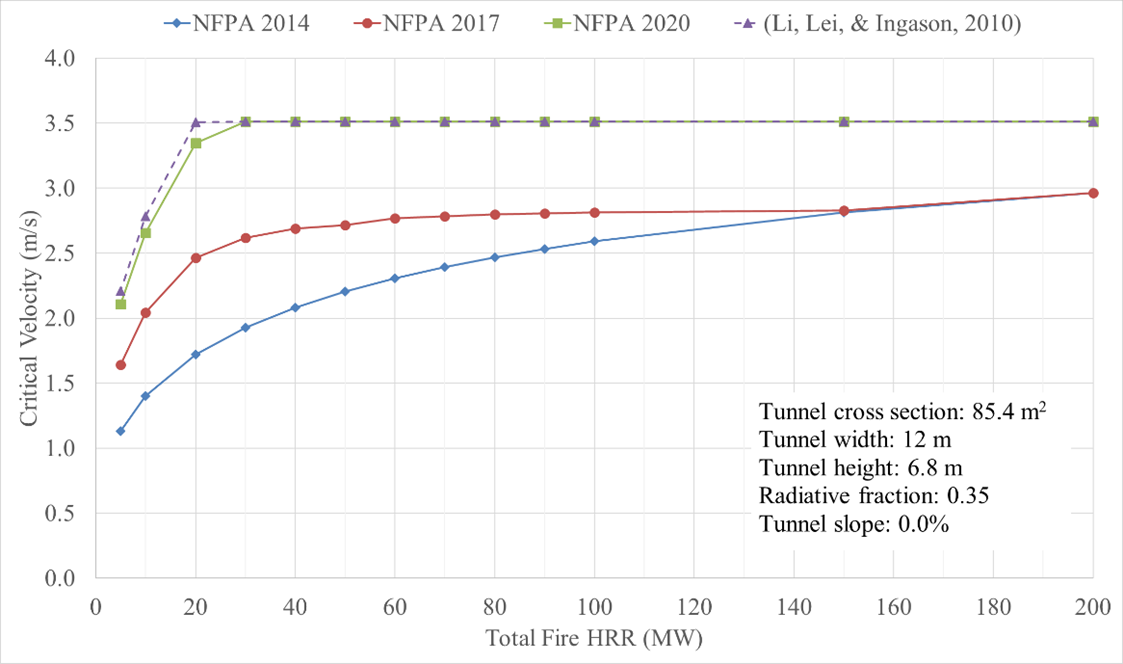 Why are the Memorial Tunnel tests regarded as so important?  Surely they are not the only full-scale fire tests?  Firstly, with regard to road tunnels, the Memorial Tunnel tests are the best-documented fire test results ever made available (CD-ROM, http://www.tunnelfire.com/order.htm) and are the most well reputed large-scale fire tests to date (Ingason, Li, & Lönnermark, 2015).  The HRR analysed ranges from 10 MW up to 100 MW, which covers relevant fire sizes for road tunnels.  Secondly, the Memorial Tunnel test series are the most comprehensive regarding smoke layer behaviour and analysing critical velocity, whereas other tests looked more at HRR of fuel loads, and downstream conditions.  Apart from the Memorial Tunnel tests, (Li, Lei, & Ingason, 2010) in their work also used full scale data from the Runehamar and the EUREKA fire tests to validate their formula.  However, the main focus of the latter two full scale test was not on the analysis of backlayering and critical velocity, and there is only one relevant data point.

There is no dispute about the details of the data treatment, with spreadsheets being exchanged and confirmed by Ingason and Li.  Ingason has confirmed that they shifted the Memorial Tunnel data to where they expected it should be.

After the publication of the findings as a pre-printed paper of the Graz Conference proceedings (Stacey & Beyer, 2020a), Stacey and Beyer wrote to the chair of the NFPA 502 Committee about these findings and the issues with the formula.  A critical velocity working group was then formed, to critically review the facts and findings.  The working group independently reviewed the supporting data and finally also concluded that the critical velocity formula in Annex D of (NFPA 502, 2020) greatly over-predicts the air velocity to prevent smoke propagation upstream the fire in road tunnels under a range of important design fire sizes.  Based on this outcome, the NFPA Committee decided during the public meeting in October 2020 to release a tautologically named “Temporary Interim Amendment” (TIA) retracting the critical velocity formula in Annex D of (NFPA 502, 2020).  The TIA is expected to be released in late April 2021.  Word of the problem is spreading fast (including by this article), and by the time the TIA is published, the TIA will serve as confirmation of the industry knowledge.

What to use now?

Authorities, specifiers and designers have used Annex D for a long time, and retraction of the formula creates a void for them, as it is now not clear which method should be used.  The TIA does not even wind back to 2014, it just leaves a blank space.  The Committee that has, for the whole working lives of many tunnel ventilation engineers, said how the calculation of critical velocity might (should) be done, will now withdraw all such advice (at least until the 2023 version comes out).

Until 2023, and probably beyond that, projects will still need to decide what to do about smoke control in road tunnels, and perhaps how to calculate critical velocity.  There are several possibilities.  One would be to keep the critical velocity as a design criterion and use equations from previous NFPA 502 versions 2017 or 2014.  The 2014 equation has limitations discussed above, and it is important to note that the 2017 equation was likely also influenced by the shifted data in (Li, Lei, & Ingason, 2010).  Contracts often lock in a particular version of NFPA 502 (say 2014 or 2017) and do not change the project requirements – even if the text of the standard is ‘updated’.  Such projects may not have the void created by retraction of the 2020 Annex D.  Projects referring to the 2020 version, or to “latest versions” of standards generally, have a void to fill in that the TIA (that is expected to appear in 2021) may retract the 2020 Annex D totally, without a mechanism for falling back to prior versions.

Another possibility would be to use this void as an opportunity to review the design requirement, to think about other conceivable criteria apart from critical velocity in describing smoke control during a tunnel fire, and to find either an optimum balance between capital costs and tunnel safety, or perhaps just optimal safety.  The 2020 version of NFPA 502 also points out the risks and concerns of high velocities during a tunnel fire and discusses the allowance of backlayering of smoke within an already untenable zone in the vicinity of a fire.

As briefly raised at the beginning of this article, several regulations and standards in Europe could provide views about ventilation strategies with lower airspeeds, and design requirements which could be adopted for road tunnels anywhere.

Noting the void that the data shifting, and the subsequent formula retraction, has left in the industry, a further article is in preparation for this Society, aimed at clearly laying out the available options for filling the void, and offering further insight into tunnel smoke control for motorist and responder safety.